UPDATE 2022: This product has a new label and a new name — Ultimate Immune Support. It is still the same set of products and is still recommended for patients of Lyme disease as well as those looking to support their immune system. Please don’t be confused by the new name and new look! 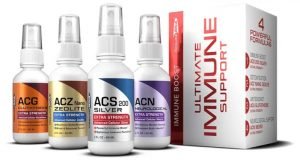 This box of four spray treatments (each in 2 oz. bottles) developed by Results RNA includes the following support systems for Lyme disease patients in a ONE-MONTH SUPPLY (30 days):

ACS 200 Extra Strength is the only antimicrobial proven to kill Borrelia burgdorferi and coinfection agent Powassan virus. The leading silver-based supplement, ACS 200 achieved 99.9999% (complete) kill against Borrelia burgdorferi in less than 8 minutes as determined by independently-derived, in vitro, benchmark kill-time studies. This data provides the scientific basis for using ACS 200 as an effective anti-Borrelia agent. In the clinical setting, many practitioners currently prescribe ACS 200 to their Lyme patients with excellent outcomes.

Dr. Burgdorfer described similar in vitro testing results using a silver preparation.  He surmised that silver disables the enzyme(s) used by bacterial, fungal and viral agents for their oxygen metabolism causing them to suffocate upon contact. There have been reports of elimination of late-stage Lyme symptoms using ACS 200 Extra Strength.

A powerful oral detoxification agent, ACZ nano selectively and irreversibly binds and excretes toxic heavy metals, such as Mercury and Lead, chemical toxins, radioactive toxins and free radicals via the urinary tract, without removing vital nutrients. These results have been verified in multiple, independent urine challenge studies. Removing damaging toxins is vital for Lyme sufferers if health is to be restored.

As ACS 200 kills the Lyme-associated B. burgdorferi, various toxins are released and can cause a “die-off” or “herxheimer reaction”.  ACZ Nano Extra Strength mitigates typical die-off reaction by binding toxins and sub-particles released from the dying Lyme organisms. ACZ nano also increases alkalinity by binding free radicals and acids. Tissue alkalinity is required for the body to heal, especially the neurological system in people affected by Lyme disease.

ACG Glutathione Extra Strength: Glutathione (GSH) is the most important intracellular anti-oxidant of the entire body: protecting, healing and rejuvenating

GSH is especially important for brain cells and other components of the nervous system at risk for damage from the highly toxic Lyme organism, B. burgdorferi.  The tri-peptide, Glutathione is the most important anti-oxidant in the body. GSH prevents damage to important cellular components caused by reactive oxygen species, such as free radicals and peroxides.

Low Glutathione levels are proven to make us susceptible to chronic illness. The latest research shows that nearly all chronically ill patients suffer from Glutathione deficiency.

ACG Glutathione Extra Strength intra-oral spray is an important breakthrough in GSH supplementation. Previously, the only effective route of administration was IV and very expensive. Independent clinical research has demonstrated an increase of intracellular levels of GSH by over 10% after only 7 hours of intra oral administration of ACG Glutathione.

There are complex factors that contribute to the many health issues associated with Lyme disease. When taken together, the Ultimate Lyme Support System is highly effective in broad support.

There are no reviews yet.